A dressage colt for the breeding,greetings from Vamos Amigos 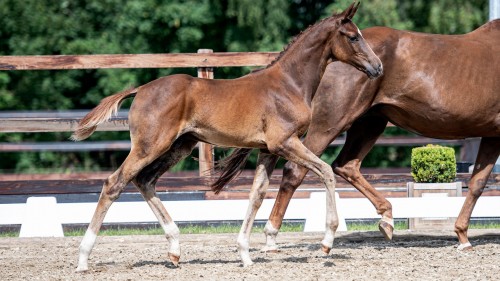 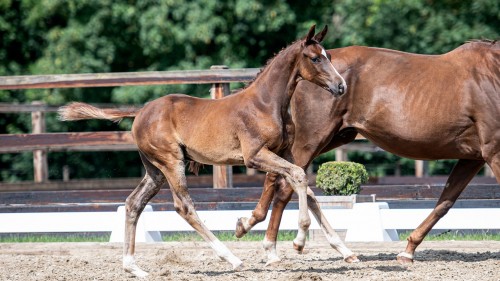 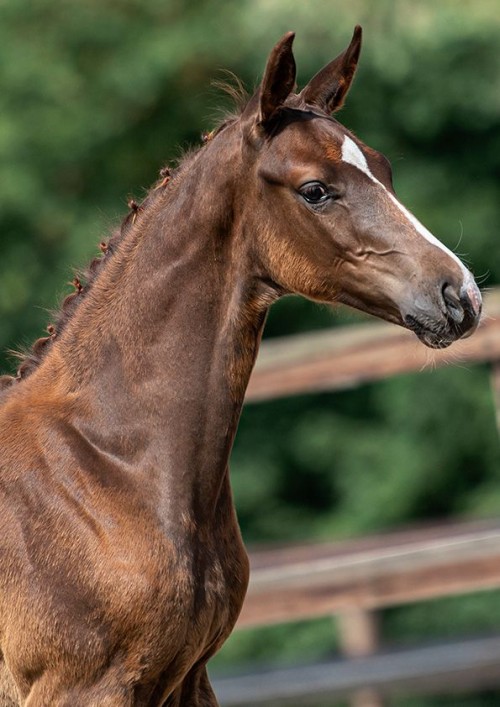 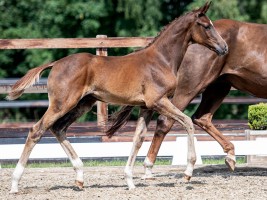 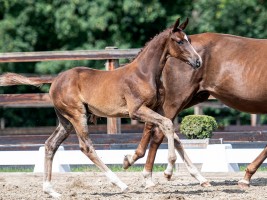 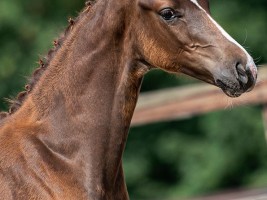 Wallace Dorado comes from a strong Dutch dam line with many prok, ster and preferent mares. Dam Fabiola C herself did not compete in the sport due to an injury.
Through her sire Florencio she carries the blood of Florestan I, the pre-eminent dressage ambassador of Westphalia, with several other approved sons such as Fidermark, Fleurop, Fürst Heinrich, Faveur, Neostan, Flores, Freestyle and Flieder.But Florencio I was not just anybody.  At a young age he was world champion under Hans Peter Minderhoud, he competed in the sport up to small tour level and is the sire of numerous licensed sons and top dressage horses.

Also very important, however, is the predicate-rich grandmother Zenica (prok, preferent, ster and provisional keur) who is also the grandmother of none other than Catherine Dufour's Vamos Amigos.
Further in the dam line there is also the top stallion Sandro Hit, the fantastic World Champion of the 6 year old dressage horses in Arnhem 1999 and sire par excellence. Always good in the dam line.

Father Donier (De Niro x Totilas) a direct son of De Niro from the famous lineage of Finnländerin. With his great conformation, unprecedented strength of movement, multiple-primed foals and very popular with talent seekers, Donier immediately put an exclamation point behind his breeding power! He himself completed his performance test in Schlieckau with expected highlights in the basic gaits, willingness to work and overall impression (each a 9.0) at the head of the field.   His sire, the Grand Prix stallion, De Niro led the WBFSH world ranking of best dressage sires for 6 years in a row and is currently ranked 10. Donier's mother Thery was successful in dressage herself and also produced the approved stallion Fürst Toto (by Fürstenball). Great-grandmother Sunny Girl produced the licensed vice-Landes champion and two-time Bundeschampionat participant Lord Schufro OLD (by L'Espoir). Through her daughter Funny-Girl (by Fürst Romancier), she also became great-grandmother to the licensed San Bordeaux (by San Amour I). Fourth dam Fantastica also produced the licensed stallions Sunny Boy (s. Sandro Hit) and Classico (s. Classiker). More than 50 licensed stallions have their origins in the famous lineage of Finnländerin.
Totilas, the living legend, who rose to unprecedented heights under Edward Gal. Totilas, World Champion and World Record holder, is the dressage horse that gave the dressage world a new dimension. Totilas and Edward went from record to record in no time. Three times he broke the world record - first in 2009 at the European Championships with 90.75% in the Freestyle, then in Windsor with 92.3% and finally at CHIO Aachen 2010 the Grand Prix Special with 86.45%. World Champion in Kentucky, European Champion in Windsor, World Cup winner in 2010 and twice Dutch Champion. With the Dutch team he also won the European Championship and World Championship.